In Wellington, we went south to find a free camping area, still quite close to the city, which was pretty interesting. It was, as all the time in Wellington, pretty windy. But we appreciated the view on the Cook Strait at the end of the day. 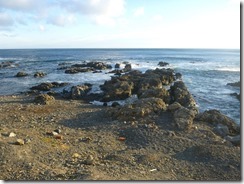 On Sunday, we visited the Te Papa Museum. It is a really big museum, pretty interactive and there are a lot of different areas with many different topics. We spent about 6 hours inside, between the nature, animals, the geology (earthquakes explanations), some inexplicable art pieces, the Maori origins, the immigration to New Zealand from its beginning, the Air New Zealand show (we could watch all their safety videos, which are pretty good and funny) and probably a lot more… I have to admit, that at some point I couldn’t read or listen to anything more, so I sat in a corner and waited for Alex, who was still reading. 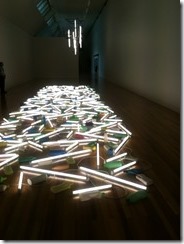 At the end of the day, we drove to Levin, to use the same free camping ground near the river that we used a few weeks before.

Then we went to the Taranaki region, try to see the volcano between the clouds but it wasn’t really a success. We drove all around on the coast (surf highway), had short walks on the way and could see The Mount Taranaki at some point, yeahh! But that was it. The weather was uncertain for the following day, but we decided anyway to stay in the area and try to go on a hike… well, this did not happen. When we woke up, there were clouds and fog, really low! Nothing to see at all, so we drove away. We went on the forgotten world highway for a bit of landscape despite the clouds, which ended up being clearer sky when we drove away from the coast. 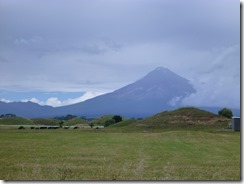 The only moment we saw the Mount Taranaki! 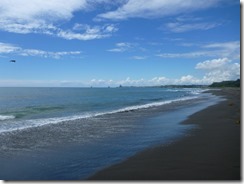 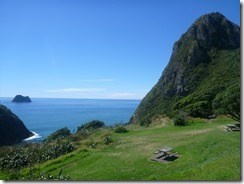 We climbed that rock, on the right 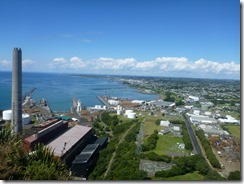 And saw New Plymouth (and not the Mount Taranaki, back into the clouds) 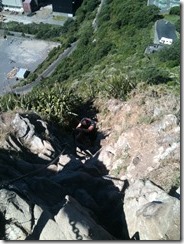 Climbing this rock is not that easy 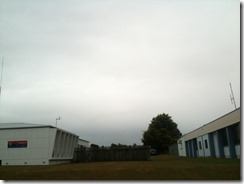 The Mount Taranaki… or the fog! 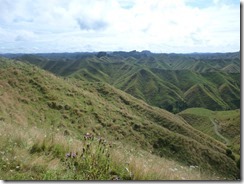 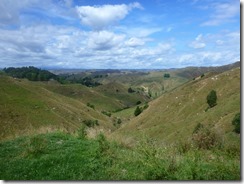 We spent our last night of the trip on the west coast, near Kawhia. At low tide, we went to the black sand beach and digged our own hot pool! At some spots the water was really hot, but our pool was warm, it was perfect! We ended up having black sand everywhere but it was nice! It was also sunset time, so it was a really nice moment. 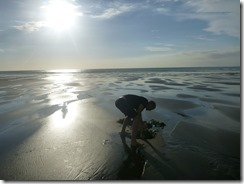 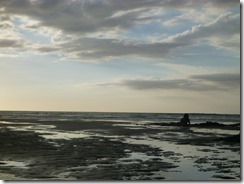 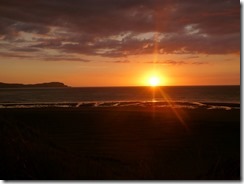 And the day is over…

This does compete with Hot Water Beach on Coromandel, first because there is nobody, it is not as famous (probably not as hot as on Coromandel, from what I remembered…) so it was nice to be there, almost by ourselves on this really long beach! (there was only another couple with us on the beach)

And that was it, the end of our trip! We drove back to Auckland and were happy to catch up with the Schnaps family for a week! We also visited Warkworth Lodge family for one evening and my mum arrived a few days later, so we spent some time together. At this occasion, I made my first Pavlova, which was pretty good even though I was not really confident when it cracked in the middle…

Pavlova with Strawberries and chocolate

Then it was time to leave New Zealand, after our 3 months visitor visa, on Thursday, the 5th of March, we flew to Melbourne, Australia. We are spending the next 3 months in Australia and we will go back to New Zealand beginning of June.