We started the last part of our trip with driving down to the southern most point of the south island of New Zealand, Slope point. There, there is nothing. A long gravel road leading to sheep fields and a bit of rocks, with a sign posted in the middle… 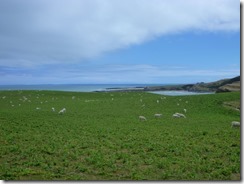 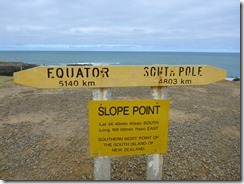 Well, would you expect more?

The plan was to follow the tips from other travellers and locals and go to Curio Bay for Dolphins, yellow eyes penguins, blue penguins, sea lions spotting. So we went there and tried our best (actually no, our best would have been to actually swim in the 12 degrees ocean) to see any animal… it was not that successful!

But the view and walk on the beach were really nice or watching the waves splashing on the rocks… we managed to have a fire for dinner despite the strong winds, it was nice to cook food in the embers again. 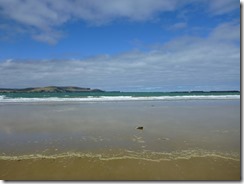 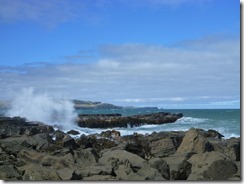 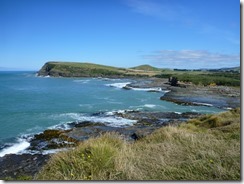 In the evening we went around the bay to try to spot some yellow-eyes penguins after sunset. It was so cold that we did not wait too long. We saw half of one penguin in the bushes, it was better than nothing so we left again. 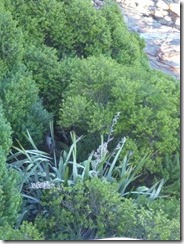 The following day the wind was down so the ocean way ore quiet, but we still did not spot more dolphins in the bay. Too bad! We started driving and stopped for a few waterfalls, view points, seals watching… until we stopped in Dunedin, at Ocean view, right next to the beach for the night! 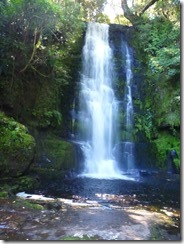 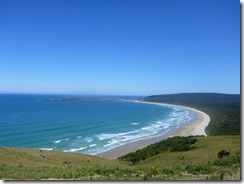 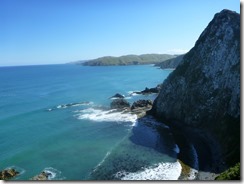 Kaka Point, the cliffs to the light house 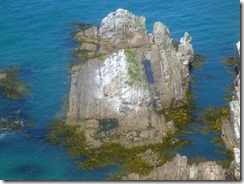 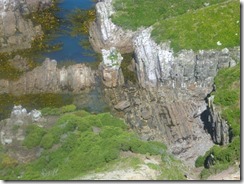 Can you see the fur seals playing and splashing in the pool and laying around in the rocks? 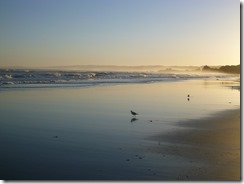 Then we drove up to Mount Cook Village…it was quite a bit to drive, had some nice views while driving on hills, plains and damns. We stopped to take hitch-hiker with us, when the car started smoking form everywhere… we had a look and there was oil spilled all over the engine, all under the car… well done! We managed to drive back to the closest town, Twizel and find a workshop. (we didn’t give a lift to these hitch-hikers then) Luckily it was the middle of the week, middle of the afternoon, so we found one open. We talked with the guys and asked them to replace the oil, change the filter and clean up the engine. We also asked them to check if the dip stick was the right one, because we had doubts on it (we refilled 1,5 litter of oil in the previous 2 days and the stick was barely getting oil on it). Well, we were right, the stick was too short, so we basically put wasy too much oil in the engine, and it had to go somewhere! So it went out through the main oil cap and messed up the whole engine. Nothing too bad though, even if  we spend too much money for this “repair”, we were back on the road 2 hours later or so. (with a good layer of oil under the car that will protect from rust!)

We made it to Mount Cook village on time for a sunset walk with a great view on the valley and mountains. 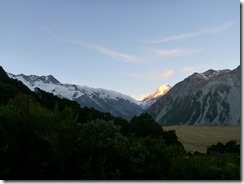 Sunset on the Mount Cook

In the morning, we started hiking up to Sealy Tarns, about 2000 steps straight up in the steep slope. Amazing view though, so even if I complained a lot because of these steps, it was beautiful! 600m height difference later, we were at the tarns, at the bottom of Mount Sefton and it’s glacier. We heard and saw a few avalanches, it was impressive. And straight under us, we could see the village and the valley, without forgetting the big Mount Cook, watching us from its 3724 meters height. 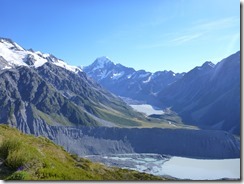 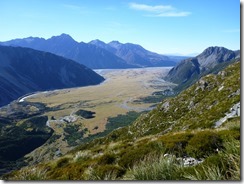 The village and the valley 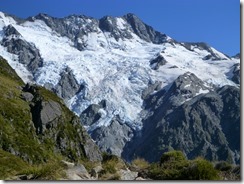 After a deserved rest, we headed downstairs and kept walking once back in the valley, to Hooker’s Lake. 3 swing bridges on the way to the lake and all along the way we faced the impressive Mount Cook! 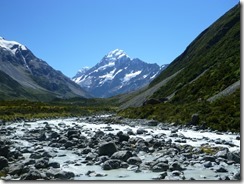 The Mount Cook in the Valley 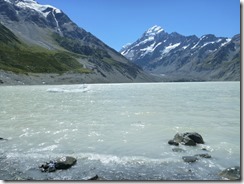 Hooker’s lake with icebergs and the Mount Cook

It was getting late, the weather forecast was not that good for the evening/night, so we left. We stopped at the Tasman Glacier, which was not too impressive, but we had another view/angle on the Mount Cook before the clouds came. 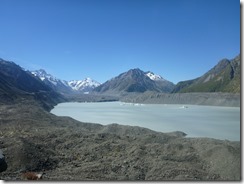 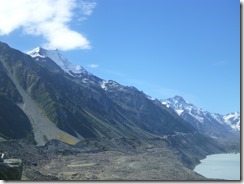 The Tasman Glacier and Lake, and the middle peak of the Mount Cook before the clouds!

We planned to stay around the lake Tekapo for the evening, but the weather was not too nice so we kept driving to the north and west. We stopped in Geraldine and kept driving to Christchurch the day after. 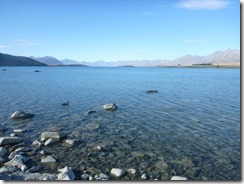 We arrived in Christchurch around mid-day, so we went to the beach for our lunch break… nice long sand beach, a little bit of fog and clouds made us doubt a bit about our lunch, but it went fine. 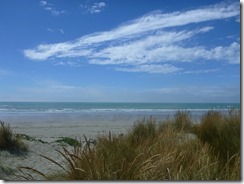 Christchurch, on the beach

We gave a wash to Apteryx (after the oil incident, there was oil on the windshield, on the doors, on the back of the cars, behind the wheels… everywhere!!) in a fuel station, it was needed!

In the afternoon, we met with Anthony, who we met on the trip earlier (one night in Fiordland near lake Monowai and on the Stewart Island Great Walk). He invited us to stay at his place if we wanted to stay in Christchurch, so we did! We went to a pub with some of his friends, drank some happy hours beers, cooked dinner in a proper kitchen and got a shower and a comfortable bed for the night! It was an other pretty nice break on our road trip.

We kept driving up along the coast, took more hitch-hikers with us, and stopped in Kairoura. We went on the rocks around low tide to try to collect some Paua, but didn’t find any. We walked all along the rocks, and found a seal lion colony. We watched them for a while, kept walking along beaches and then up to the top of the cliffs for a nice view above the bay. 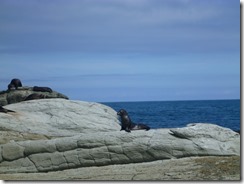 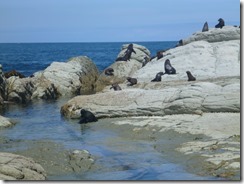 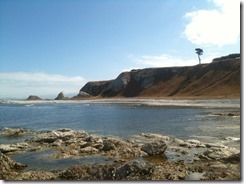 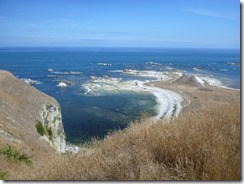 From the top of the cliffs

We went back to Robin’s hood bay for the night, where we spent our first night on the south island. It was still beautiful, and had a nice night and relaxing morning until we drove to Picton and got into the ferry to Wellington! 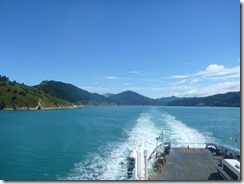 Back to the north island…