Apteryx, Alex and me (yes, the 3A Team) left Auckland on Monday 19th of January. The plan is to drive to the south island quite fast, but still with doing something between all the driving…

Our first stop was in Taupo, for the Huka falls and the hot river (even though it was so warm outside that I more felt like having a dip in cold water…) gladly the hot river joins the cold Waikato river, where we could swim as well and get refreshed! 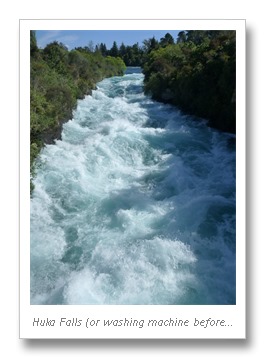 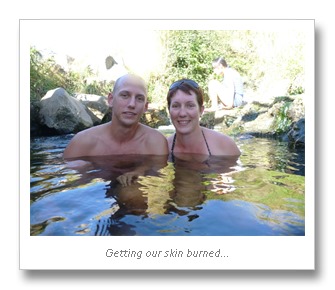 Well, by that time, it was already the evening and we didn’t want to rush down to the Tongariro National Park to wake up early to do the hike. So we postponed it for one day, and had to find something else to do. Not that hard, we had a look at the map, and decided to drive to the south-east of Rotorua, on the side of the Lake Rerewhakaaitu (maybe I will be able to pronounce this name one day…), to spend the night in a nice and quiet campsite. 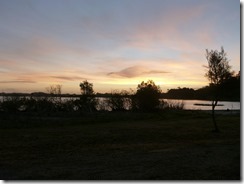 Quiet sunset at the lake Rerewhakaaitu

The following morning, we went to Rotorua center and got some information about what to do in one day. So we went to the city thermal park, that was nice but smelling like rotten eggs of course! There were pools  of different kind and colors, and steam coming out of the ground or behind rocks.

Then we had a walk along the lake, and decided to go to Te Puia, to see the Pohutu Geyser and some kiwis in a kiwi house.

In Te Puia, we had a presentation about some parts of the Maori culture, especially about carvings and weaving. It was really interesting to see what can be done with flax, which grows everywhere here!

Then we tried to see the kiwis, but unfortunately they were asleep in their dark house, so no kiwi show

So we walked down to the geysers area, stood in front of a bubbly muddy pool, and saw the geysers. There were 3 geysers :

– a small one, Kereru Geyser, named after a wood pigeon because of its fan-shaped plume looking like a tail of a bird (yes yes it does look like it!)

– an “indicator” one, called Te Tohu or Prince of Wales Feathers: when it reaches about 6 meters high, it means that Pohutu is ready!

– Pohutu, that spurts every half an hour for a few minutes and can reach up to 30 meters (it did once actually – for us it was about 15 meters)

It was quite a nice experience (even though the smell was quite disturbing…) to see this boiling water spurting out of the ground just in front of our eyes. 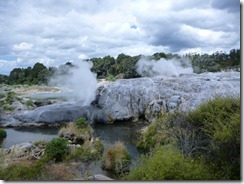 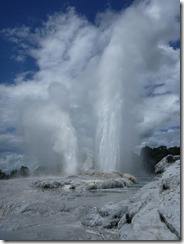 After that, we eventually decided to get ready for the day of hiking (Tongariro Alpine Crossing), and drove to the Tongariro National Park, to a campground south of Whakapapa.

The view on the Lake of Taupo was pretty nice… and the sunset was amazing from the campground at the bottom of Mount Ruapehu. The evening and the night were really cold, it was a clear night and it is like the desert there. When we woke up before 6:00 am, after dismantling the tent in a freezing cold air and had to start driving, we realized that the windshield had frost on it, so we understood why we were feeling so cold… well, without an ice scrapper, it took us a bit to get rid of the frost, but were still in our time schedule!

We met with a couple of Germans, Dara and Jacob, who wanted to do the same hike than us and where also wondering how to get back to the car without paying $30 per person…well, all set! We all drove to the end of the hike at 6:30 am, left our car there, and drove all of us back into their car to the start of the hike! Money saved: check! Meeting people: check!

We started our way up like planned, around 7:30. We were climbing on the west side of the Mount Ngauruhoe (=Mount Doom in the Lord of the Rings), so we had in front of us only its dark shape while the sun was slowly rising up. When we arrived at the pass between Mount Tongariro and Mount Ngauruhoe, we could already see the interesting volcanic colors. 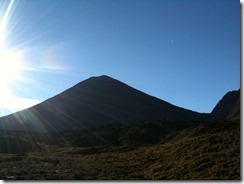 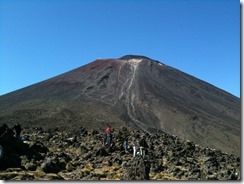 Then we walked through the craters, which was quite impressive, and had a little bit more to climb up until the highest point of the track. There, we decided that we wanted to see the view from the Mount Tongariro, which was a really good idea even though it added up some elevation to our trip (and for our legs!). We had a stunning view on the Mounts Ngauruhoe and Ruapehu, the central crater, the whole west side of the valley, the emeralds lakes and the blue lake and the Taupo Lake… 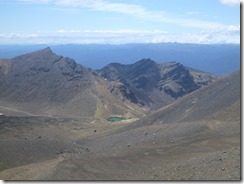 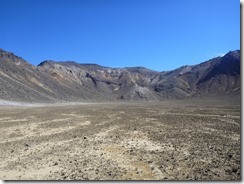 The view from Mount Tongariro : Mount Ngauruhoe and on the right behind is Mount Ruapehu

After this 1 hour side walk, we got back on the crossing track and ended on top of the red crater… stunning as well! Then we had a steep way down to the emeralds lakes, in deep gravels. While everybody was struggling to go down slowly and avoid to put their feet too deep in the gravels, Alex and I were just going down in the deep gravels (filling our shoes with gravels of course, but whatever, we emptied them at the bottom) with wide steps, like if we were going downhill in deep snow! It was a really fun part (and I certainly wouldn’t have appreciated going the other way around for this part!!). The Emerald lakes were… emerald!

Haha yes, of course, they were beautiful. Some steam coming out of the stones on the side of the track, near the lakes, everywhere…really strange atmosphere! 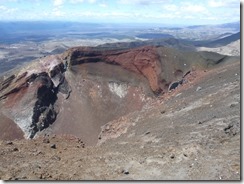 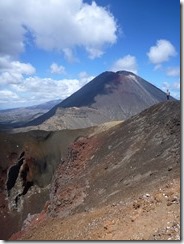 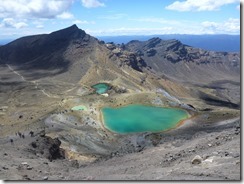 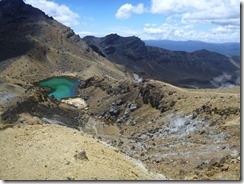 Emerald Lakes… and steam coming out of the ground

Then we arrived at the blue lake, which was a nice looking (blue) lake, but in the end still just a lake (compare to all the other things we saw before!) 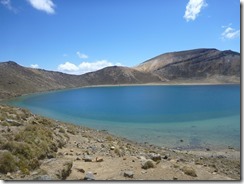 And it was time to start the way down after a short lunch break… what a looooooonnnnnnggggggg way down! it was not steep at all, the track perfectly maintained, easy to walk. But long! 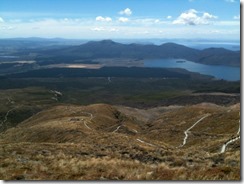 The way down… can you see the track until the bottom after the forest?

We eventually made it back to the car, after 19,4 km, +1000m/-1200m vertical drop and 8,5 hours walk, at the same time than the couple of Germans (we lost each other a bit during the track), perfect! We drove them back to their car at the start and left for a camp to have a good rest! 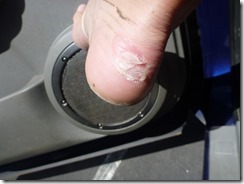 and take care of my feet as well…

We spent a quiet night at Ohakune, and decided to drive to Wanganui the following day. This was a pretty nice drive through the country side, we spend some time in Wanganui museum, went shopping and left again in the afternoon.

We found a free camping south of Levin (oh, the same one than 3,5 years ago!

), with a river to have a dip and clean ourselves quickly in the cold water.

On Friday 23rd of January we drove to Wellington, went up to the Mount Victoria for the view and then went to the ferry to cross the Cook straight! 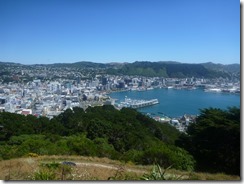