We kept driving north after the Pupu Springs, along the Golden Bay, and reached the beautiful Wharariki beach, with white sand dunes, seals, caves, blue ocean and cliffs. 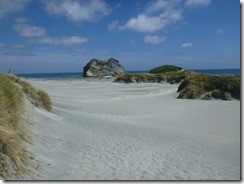 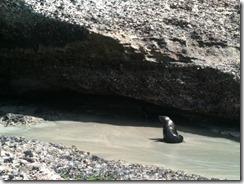 Seals playing in the rocks 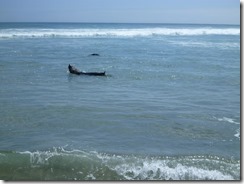 Seals playing in the shallow water 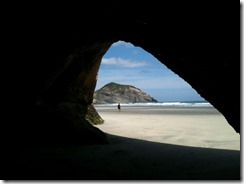 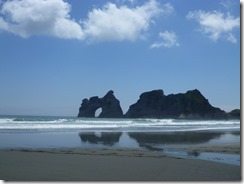 We also went up to the Cape Farewell, on top of the cliffs, quite impressive. Then we drove to the beginning of the Farewell Spit, to take a bit of height and try to see the Golden Bay and the Spit. Unfortunately the Spit is accessible only for special guided tours because it is a Nature Reserve (bird Sanctuary), so we didn’t have access to it. (We could have walked on the beach the first kilometers, but decided not to in the end and drive back because we still had a long distance to drive.)

After this nice looking views, we left, and I realized 50 kilometers further south that I forgot 1 of my flip flops on the car park… not really handy with only my right shoe… 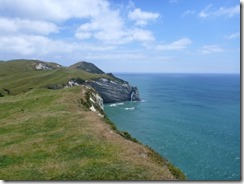 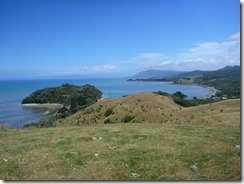 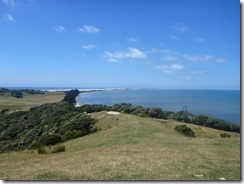 Even though I went there already 3,5 years ago, it is still amazing to see these landscapes!

We stopped on the way south to a river near Collingwood to have a swim, with a small waterfall, rocks to jump from (of course not for me…hard to jump and keep my ears out of the water, but it was fun to see others jumping).

At least we got a bit cleaned up in this river! 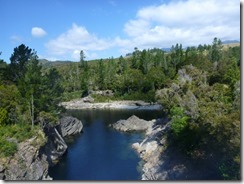 We decided to go camping in the middle of the Abel Tasman National Park, at Canaan downs… Well, it was without exactly considering the size of the Luminate Festival, which was starting the following day 1 kilometer in the mountain before our campsite. All installations were settled, tents, food areas, music areas, activities… and already hundreds of people were around, volunteering or just going to the festival… They informed us that we could go to this campsite if we wanted to, but that we should know that the following day there would be about 4000 people coming up on the narrow windy gravel road, and basically we would not be able to go down because of the upgoing traffic… So we decided to go to the camp anyway for the evening, to do the walks that are interesting and then leave before the night. The small campground was anyway also crowded anyway with people, playing music, hanging around… So we parked, walked to the Harwoods hole and the Gorge creek viewpoint tracks and left again.

These 2 walks are pretty impressive. At the Harwoods hole, the track ends up on top of a hole, the deepest vertical shaft in New Zealand (about 180 meters – then connects to another cave and in total its depth is 350 meters!) it is impossible to see the bottom of it from this edge. Pretty dangerous, we watched each one of our steps carefully… 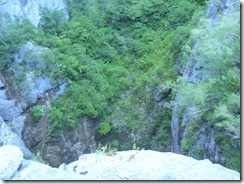 Harwoods hole (impressive even though we cannot see anything!!)

The Gorge creek viewpoint is as well stunning: walking on sharp limestone rock formations (sharpened by the rain), until the valley lays straight under our feet. Nice views! 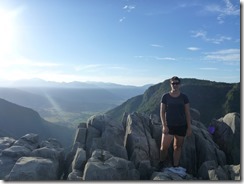 We slept not far from Motueka, near a river so we experienced again the sandflies a lot… In the morning, we went to see the Spit Apple rock. The beach was quiet, nobody was there! The water was really clear, the yellow sand was beautiful, it pushed us to have a morning dip! 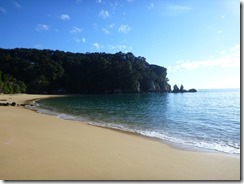 Split apple rock and the beach in the morning

At that point we had to decide where we wanted to go next… which was not to hard! We headed south in the direction of Nelson Lakes National Park.

We started a 2 days hike there, a really hard steep track for the first 2 hours, which were terrible for my legs! We arrived on the ridge, with stunning views on the lake and all the ranges around… there were still 4 hours walk to the Lake Angelus hut for the night, on top of that ridge! But my body felt so tired that we went down on the other side and skipped the night at the hut, 1600m on top of the ridge… too bad! Maybe another time! 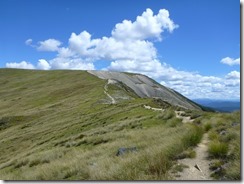 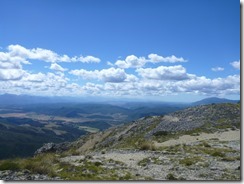 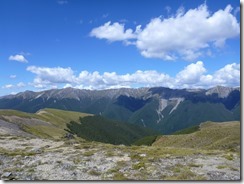 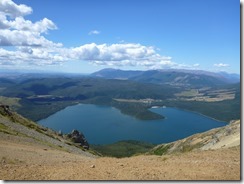 After this day walk and a resting night near St Arnaud, we drove south, to Christchurch.