We started our exploration of the west coast at Pancake rocks and then just drove south, with a few stops on the way. We experience our first really rainy day in Hokitika, where we spend a big part of the afternoon in the library for Wi-Fi internet and charging laptops and camera. 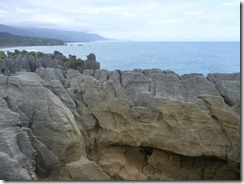 We visited the jade shop (greenstone) and had a small tour with explanations about the jade in New Zealand (with is called Pounamu in Maori), where and how to find it, how to cut and carve it, we saw people working the stone as well.

Then the rain stopped for a while, so we used this time to have a look at the beach, which has just been used the previous days for a driftwood and sand festival / contest. People are using whatever they find on the beach to build some shapes of every kind. 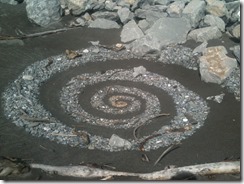 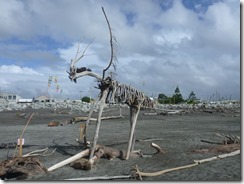 We headed to the campground near Lake Kaniere, started to prepare dinner and the rain started again, without stopping until the morning… that was a pretty exciting evening! 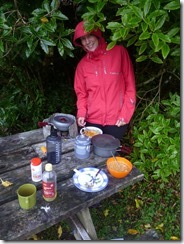 Trying to shelter under trees for dinner

The next day we had a look at the amazing Hokitika Gorge Reserve which was not that amazing for us because the water was not turquoise but grey because of all the rain… but Alex had a lot of fun on the swing bridge anyway! 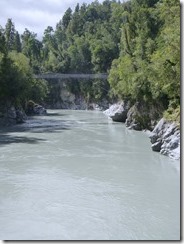 Afterwards we drove south, without rain, and stopped in Ross to walk along an old gold mine. 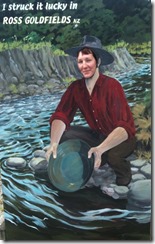 The view from Ross’ hill 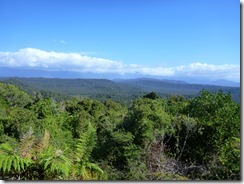 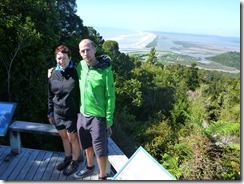 Okarito… the clouds above the Southern Alps and the lagoon

Our day ended on the side of the lake Mapourika, where we cooked a fancy meal (with vegetables!) because there was no rain, we could take time outside to cook properly!

We woke up and it was pouring rain… yep, west coast weather! We drove to Franz Josef village, the weather forecast said that it might become later in the afternoon, so we hung around until we could maybe have a chance to see the glacier. We spend most of our morning in the Wildlife center, looking at small kiwis in the dark and learning about glaciers. And we finally discovered the truth about kiwis… 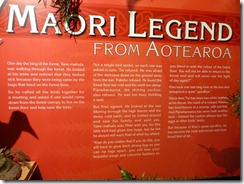 (Click on the picture to read the kiwi legend) 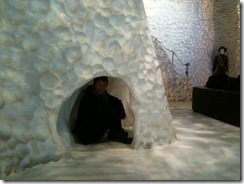 Hiding in a fake ice cave

As it was still pouring rain when we were done, we ate some of our amazing healthy food we cooked the night before sitting in the car. And then, the rain got lighter and almost stopped! Yeahhhh! So we got ready for a walk to the base of the glacier and enjoyed the views even though it was still cloudy. 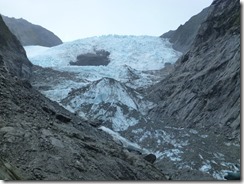 The rain went completely away and we were happy to drive a little more south to The Fox Glacier… well, until we realized that the track was closed to the base of the glacier (because of strong winds) and the lookout track on the other side of the valley was closed because of flooding… we went down a bit disappointed and tried to see something of the Mount Cook in the mirror lake (Lake Matheson)… well, with too many clouds and too much wind, it was impossible to see the Mount Cook and the lake mirror was not really mirror. We were told to wait until sunset that the clouds go away. So we waited. But the clouds were still there. So we left the area of the mirror lake to go to Gillespies Beach and spend the night there. In the morning, the clouds were still there, and it was still raining… 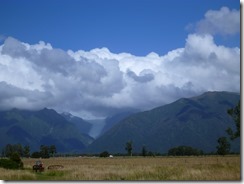 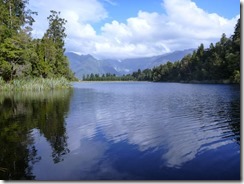 All what we saw from Fox Glacier and Mount Cook… Coulds!!!! and the mirror lake… 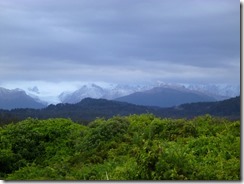 The morning view, the clouds are a little higher…but not high enough.

Hoping that the weather would change a little, we drove to Haast, got soaked on a beach walk at Ship Creek, and Stopped in Haast Village. Our idea was to drive south along the coast to get off the main highways and see something different. But the forecast did not sound better for the following days so we decided to skip everything and cross the Haast pass to Wanaka/Queenstown.

There are a lot of stopping points on that road to Wanaka. Some waterfalls, the large turquoise river, even with the rain we managed to stop and have a look.

On the other side of the pass, the rain got lighter, it was really windy, but at least we had some views over the Lake Wanaka and Lake Hawea. 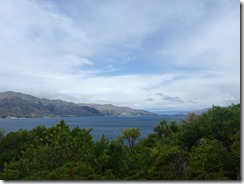 We kept driving until Lindis Valley to spend the night. This was one of the coldest night… when we woke up there was snow on the mountains all around us… in the middle of summer! 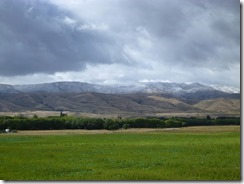 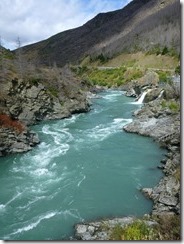 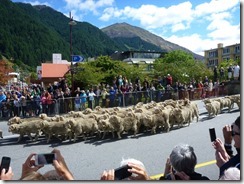 We had a look around the city, had lunch along the lake, went shopping for outdoor equipment/ hiking gears and then went up to Bob’s Peak above Queenstown. We walked, because we did not want to spend $30 each for the gondola. It was an hour walk, pretty steep but nice to arrive on top and enjoy the view, which was deserved! Even if the Remarkables mountains were a bit cloudy.

We went to Fergburger in the town because they have good and big hamburgers, and a little extra after all the pasta or rice meals is not too bad, right?

For the evening and night, we decided to go to Skippers campground. It is indicated on the maps and on the road that rental cars are prohibited, because of a windy and narrow gravel road, with steep drop-offs… pfff, no worries, we are not afraid! (until I was there…)

So here we are, a windy narrow gravel road, with really steep drop-offs! And also wash outs and no way to turn around or really hard to pass some other vehicles… when it happened, I was terrified! it was about 40 km return to this campground (and probably around 3 hours). I have never been that sweaty from driving. Imagine that on every picture, if you can not see the bottom, it is because we could not see it either! The picture don’t show how steep it was, but maybe the video a little bit more.

The must worse was 2 km before arriving to the campground, we had to cross a hanging bridge, with wooden planks… so high above the gorge that I can not even give a estimate. No idea. Well, this web page (http://www.dangerousroads.org/australia-and-oceania/new-zealand/55-skippers-canyon-road-new-zealand.html) shows a lot more about this road and says the bridge is 90 meters high and there are along the road sheer drops of several hundreds meters… I still can not really believe that I drove that one. While Alex was excited and happy and amazed, I was terrified! Especially when passing all the touring rafting buses in the morning… 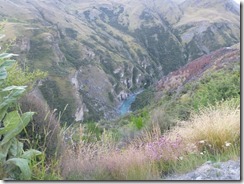 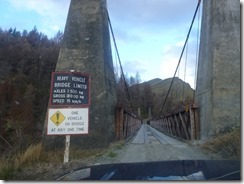 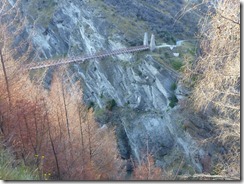 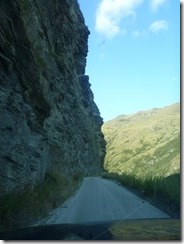 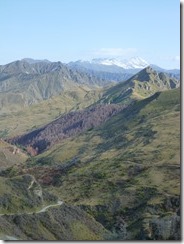 Skippers road and the sheer drops… but amazing landscape!

Still having goose bumps when I watch this one…